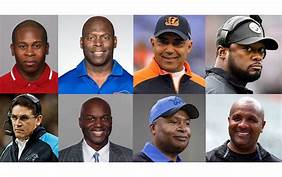 The NFL regular season is officially over, and the laundry lists of African-American coaching casualties are pretty extensive…..given the percentage of minority coaches in the league, the number receiving their walking papers are many. The only silver lining for them is that most teams are contractually obligated to pay the remaining monetarily amount of the original contract.  Now that’s an employee perk I think we can all live with.  The coaches that didn’t survive Black Monday (pun not intended) were:

Other coaches in the league whose white privilege couldn’t even save their pathetic tenure included Miami Dolphins coach Adam Gase, Tampa Bay Buccaneers Dirk Keotter, and Green Bay Packers coach Mike McCarthey.  Surprising enough, JayGruden didn’t get the ax after 3 unproductive years in DC, but his last name and proper skin tone will award him an ample amount of time to prove his capability. Now a racist could make the argument case that black just can’t cut it as head coach and should get fired, but when you don’t award them time to prove their coaching talent; it perpetuates the wrong stigma….to read more of this article, click here