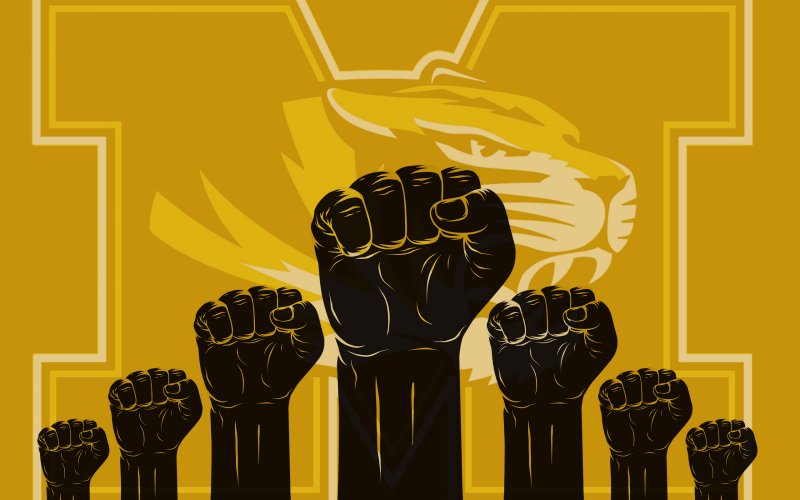 How the Missouri football team just took down its university president

Missouri linebacker Kentrell Brothers reacts during the second half of an NCAA college football game against Florida. (AP/L.G. Patterson)

For the past week, a graduate student at the University of Missouri has been on a hunger strike, hoping to force the school system’s president to resign his position over a perceived failure to address racist incidents on campus. The student, Jonathan Butler, objects to president Tim Wolfe’s lack of response to “racist, sexist, homophobic, etc., incidents that have dynamically disrupted the learning experience” at Missouri, as he wrote in a letter.

It’s a dramatic step — and one that Butler pledged to maintain until “either Tim Wolfe is removed from office or my internal organs fail and my life is lost.” But the issues at the core of his protest didn’t gain widespread national attention until a few dozen other students weighed in: the University of Missouri football team, which announced that it would not play until Wolfe left his position. On Friday, there were a few hundred tweets about the University of Missouri. On Sunday, there were nearly 16,000.

There are a few reasons that the football team’s protest garnered more attention — and was probably more likely to yield results. Given that this is fundamentally a political protest, it probably won’t come as a surprise that those reasons overlap heavily with methods of leveraging political power.

First, the team is the public face of the student body. Any number of people who live in the state but don’t have relatives in the University of Missouri system likely know student-athletes by name. Butler did a good job of making his concerns known, but having students already known and respected by the community make a similar argument lowers the bar for sympathy to the cause.

Second, the team leveraged pressure on an immediate timeline. Next Saturday, the Missouri Tigers are scheduled to play the Brigham Young Cougars. As Saturday neared, the school was under increasing pressure to resolve the dispute as public attention to the conflict continued to grow. Butler’s threat was more dire, of course, but its duration was unclear.

Third, the team’s protest threatened immediate economic damage to the university. This is perhaps the biggest issue at play. A contract between Missouri and BYU obtained by the Kansas City Star reveals that cancellation on the part of the Tigers would result in a $1 million fine to be paid to BYU within 30 days of the cancellation.

What’s particularly interesting is that the $1 million fine is a flat sum set because “actual damages — including those relating to public relations, radio and television broadcasts, lost profits, and other consequential damages — would be difficult or impossible to calculate,” in the words of the agreement. Which is almost certainly true.

According to data compiled by USA Today, Missouri’s athletic program generated $83.7 million in revenue last year, on $80.2 million in cost — a net of $3.5 million in profit. That’s a lot of money — but it’s actually fairly low for a public university. Of the 225 Division I schools that have an obligation to release that data, Missouri ranks 32nd in revenue. The top five schools are Oregon, Texas, Michigan, Alabama and Ohio State — which saw a combined $172.3 million in profit on $813 million in revenue.

That’s the fourth point: There’s huge long-term economic power in college football programs. The Tigers aren’t having a great season, at 4-5 after four straight losses. They’re still in contention for one of college football’s countless bowl games, assuming they close the season strong. If they did make a bowl, the school would get some amount of money as a bonus. Last year, schools that played in even the least-known games got six-figure payouts.

There are any number of other economic pipelines that are put at risk. The University of Michigan — a much bigger program than Missouri’s — signed a deal with Nike worth $11 million a year for 15 years. That’s just to allow Nike to outfit their teams in games. Missouri gets $2.2 million from its deal with the company — plus bonuses if those Nike uniforms make it to the college football playoffs (which, given their record, they will not).

Those television agreements that are mentioned in the BYU contract are another thing altogether. Missouri is in the SEC, which means they earn $15.6 million per year just to be seen on the SEC Network on cable. By the 2018 season, the Mercury News’s Jon Wilner estimated in March, the school will get $35.6 million in overall television revenue — and that’s a conservative estimate.

How much the school would lose if the team boycotted even one game is hard to say. But swinging back to politics, it’s easy to see where the leverage lies. The hunger striker, Butler, risked embarrassing the university badly by letting a student be hospitalized (or worse) over its policies. The football team was already embarrassing the university, but threatened economic damage as well. The operating budget for the school in 2014-2015 anticipates $1.19 billion in revenue and $1.16 billion in costs. The $84 million generated by all of the schools’ sports programs is 7 percent of that revenue total — and it’s safe to say that football is a lot of that $84 million.

For years, the debate over college athletics has centered on whether or not athletes should be paid. The fight at the University of Missouri reveals that the football team even at a less-lucrative school can exert significant political power. Which should make the administrations at those more-lucrative schools awfully nervous.