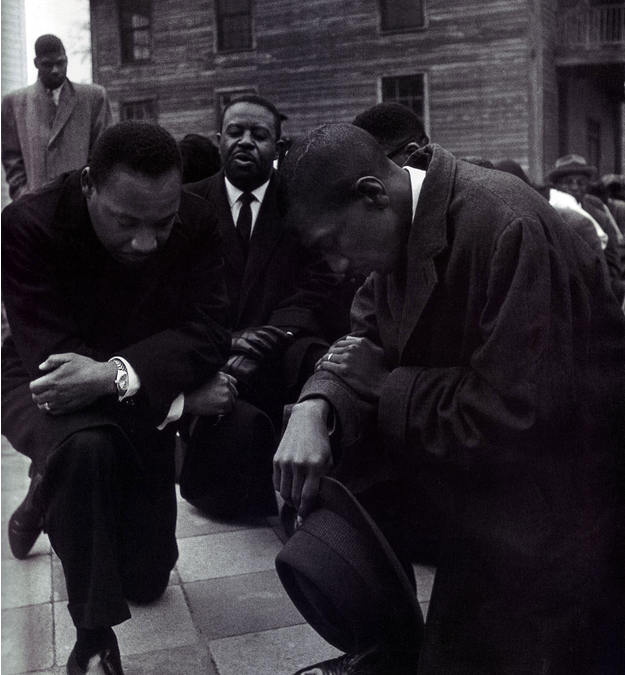 On Feb. 1, 1965, a cold, rainy day, Dr. Martin Luther King, Jr. (left), Dr. Ralph David Abernathy (center) and nearly 800 hundred other “black” and “white” nonviolent freedom fighters took a knee against voting-rights restrictions, racist violence and poverty at Selma, Ala., then one of the bastions of southern “racial” segregation.

Shortly after praying, mass arrests were made, but Dr. King and Dr. Abernathy refused to post bail as a witness against these injustices.   It was Dr. King’s first arrest since he received the Nobel Peace Prize the previous December.

“If Negroes could vote,” Dr. King declared in a speech at Selma’s historic Brown Chapel African Methodist Episcopal (AME) church before the march, “there would be no Jim Clarks [the sheriff responsible for most of the racist violence], there would be no oppressive poverty directed against Negroes, our children would not be crippled by segregated schools, and the whole community might live together in harmony” (The New York Times, 2/2/65, p. 1).

“I must confess this is a deliberate attempt to dramatize conditions in this city,” Dr. King told reporters (The Washington Post, 2/2/65, p. A1).   However, the march was not spontaneous nor were the arrests unexpected.   Indeed, Dr. King was carrying a washcloth and a toothbrush when he was arrested and he and Dr. Abernathy were allowed bags of cookies and peanuts in jail (Newsday [Long Island, N.Y.], 2/3/65, p. 1; Chicago Tribune, 2/1/65, p. 1).

As an unpublished six-page “master plan” by Dr. King’s Southern Christian Leadership Conference (SCLC) explained:   “After Dr. King is in jail, a letter dealing with bombings, violence, not being represented[,] etc., should be distributed to Negroes in Alabama…”

“We feel that if once the Negroes in the South gained the right to equal representation in government, many of the problems that aren’t being dealt with by Southern racist governments can and will be dealt with by moderate whites, and Negroes who haven’t had a chance to get into office as long as Negroes are kept from freely registering to vote” (The Boston Globe, 2/2/65, p. 6).

Because Dr. King refused bail, he was not at Brown Chapel AME two days later when the militant Student Nonviolent Coordinating Committee (SNCC) arranged for the firebrand Muslim and nationalist leader Malcolm X to address a youth voting-rights rally, where he publicly offered his support to Dr. King’s efforts.   “I don’t advocate violence,” he reportedly shouted, “but if a man steps on my toes, I’ll step on his.”

Privately, he advised Dr. King’s wife, Coretta, that he “was trying to help.”   As she later recalled, “He said he wanted to present an alternative [to nonviolence]; that it might be easier for whites to accept Martin’s proposals after hearing him” (Jet, March 11, 1965, p. 30).

However, it is unlikely that Malcolm X, who advocated self-defense against racist threats and violence — armed, if necessary — would’ve taken a knee.   “He said he was not going to march in any nonviolent demonstration…,” recalled SNCC field secretary Fay Bellamy Powell.   “He didn’t even like the freedom songs.   He said they sound too sad” (ibid.)