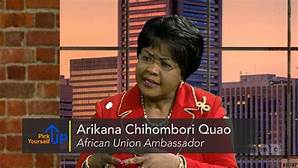 “I have the honor to inform you that, in line with the terms and conditions of the service governing your appointment as Permanent Representative of the African Union Mission to the United States in Washington, DC, I have decided to terminate your contract in that capacity with effect from November 1, 2109,” Mahamat wrote in the letter dated October 7.

The letter didn’t specify the reason for firing the ambassador, who has served in that capacity for two years.

“This is normal diplomatic practice for political appointees everywhere,” she continued, later refusing to respond to whether France was involved in the decision to terminate Dr. Chiombori-Quao.

A spokesperson for French President Emmanuel Macron declined to say whether or not Macron either ordered or played a role in the termination.

However, supporters of Dr. Chihombori-Quao, remain adamant that the French government ordered the ambassador’s termination.

The 1884-1885 conference is considered the turning point in Africa’s history.

Before the conference, nations within the African continent were treated as trading partners…. to read more, click here